This is what happens during a typical brain surgery.

On a computer screen, the surgeon pulls up an image of the patient’s brain, taken from an earlier CT scan. This image is an important reference for the surgeon during the operation, as he or she navigates the far reaches of the organ – for instance, in search of a tumour.

These neuro-navigational systems have been around for years, helping the surgeon locate the tumour by adjusting the perspective of the brain scan, or zooming in on a particular section. But there are still several disadvantages, said A/Prof Yeo Tseng Tsai, Head and Senior Consultant at the Division of Neurosurgery, National University Hospital (NUH).

“Firstly, it’s a 2D projection of an image,” he explained. “We have to constantly change our focus between the patient and a computer screen, which is a distance away.” He added that the need to constantly use a computer in the middle of the surgery could also compromise the sterility of the operating theatre environment.

Enter holographic technology, which aims to solve both these problems and more. In collaboration with Microsoft and German software developer apoQlar, NUHS has embarked on a research and development programme to explore the use of mixed reality (MR) technology – a cutting-edge amalgam of virtual and augmented reality – in clinical care.

As part of this programme, neurosurgeons in NUHS are assessing the use of MR to help locate brain tumours while operating on patients, instead of via the conventional neuro-navigational systems, which can be distracting and inconvenient. Under the MR-augmented approach, surgeons wear holographic visors – second-generation devices developed by Microsoft, dubbed the HoloLens 2 – which they can use to superimpose the brain scans directly over the patient’s head. 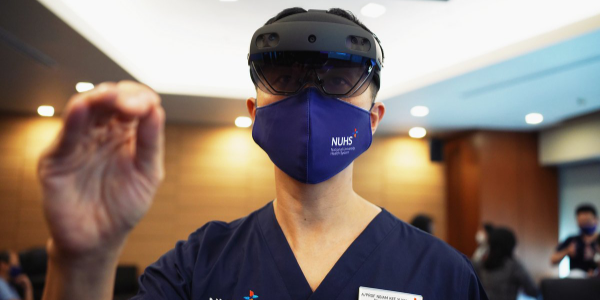 “With the HoloLens, you’re looking right through the skull, the brain, the skin…you can see right where the tumours are, and know where to make the incision. So it’s much more intuitive for the neurosurgeon,” explained A/Prof Yeo.

So far, between 10 and 15 surgeries have been carried out with the technology, the team noted.

The technology could also be useful in a variety of other areas in healthcare, from undergraduate and patient education to home-based care. For instance, at the NUS Yong Loo Lin School of Medicine, MR is being introduced into undergraduate teaching, in hopes of offering students a more engaging and comprehensive experience.

“As humans, we’re visual creatures. Anything visual, we remember much better than through reading a sentence in a book,” said A/Prof Yeo. “Take teaching new anatomy, for example…let’s say you want to learn about the four chambers of the heart. Right now as a medical student, you read the sentences and look at the diagrams and you have to picture it in your head.

“But with a hologram, you can walk around it, you can see everything happening…I think such an experience would be so much more educational for the students. 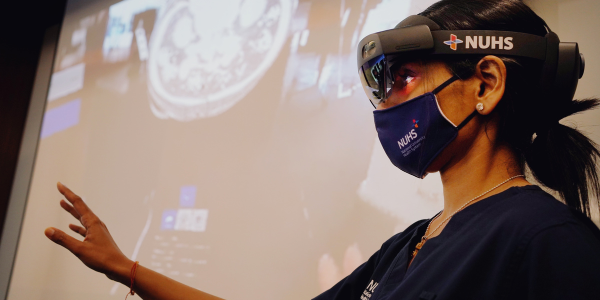 Furthermore, the HoloLens 2’s collaborative mode allows healthcare professionals from different places to conduct more in-depth discussions over holograms instead of regular images. This could mean that specialists in the hospital could give medical advice to caregivers at home, adding a new dimension to teleconsultations.

In other countries, this could have even larger repercussions, connecting city specialists with patients in rural hospitals, said Dr Keren Priyadarshini, regional business lead at Microsoft Asia.

“We can mitigate borders and boundaries,” she said. “Even if you have a complex surgery and you want to call in a specialist from somewhere else, in any part of the world, you can do that as well 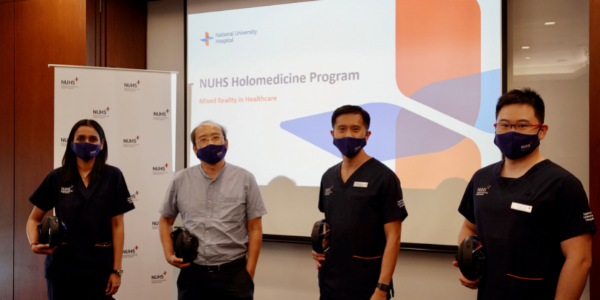 In addition to higher precision and quicker localisation, the team hopes that the holographic visor, which weighs around 500 grams and can be set up in just 10 minutes, could eventually prove a lower-cost, more compact, and more sterile alternative to bulky and expensive operation theatre equipment.

“It may provide easy access for neural navigation, not just in developed countries like Singapore, but also in underdeveloped and developing countries that may not be able to afford such expensive neuro-navigational systems,” shared Dr Swati Jain, another doctor from the Division of Neurosurgery.

But while the technology holds much potential, more research still has to be carried out before it can be introduced into regular clinical use. One challenge, the team noted, is that the technology is very data-intensive, meaning that bandwidth could prove a problem.

“So we’re actively looking at integrating the HoloLens with 5G, in order to boost the data transmission speed and make the whole system a lot smoother than this,” said Dr Gao Yujia, the programme lead for holomedicine at NUHS.

“We’re also doing our research to ensure that the deployment of these tools is safe, and that we can bring this technology to our doctors, nurses, and ultimately benefit the patients.”

The HoloLens 2 will be showcased at the AI Datathon & Expo between 27 November and 5 December. For more information, visit this page. 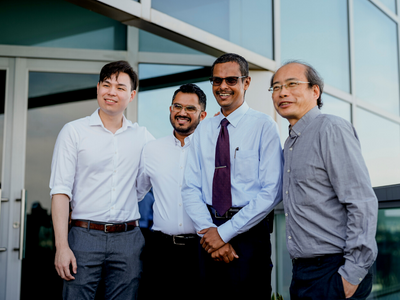 Living with glioblastoma: How a surgery saved his marriage and life

A deadly brain tumour caused Mr Maideen Sadayan to lose control of his emotions and separated him from his family. But a surgery ended up saving his marriage and his life.